Isambard Kingdom Brunel’s Great Western Railway (GWR) was created by Act of Parliament in 1835 and work started soon after from both London and Bristol. By 1838 the line had reached Steventon, just west of Didcot; travellers from Oxford had now to travel only ten miles by coach to the new railway where they could then catch a train to London. The line proved immediately popular: 77,500 passengers and 12,600 tons of freight were transported from Steventon in 1842, a considerable proportion originating in the Oxford area.

Steventon was briefly the headquarters of the GWR: in October 1841, the Board decided to merge the previously-separate London and Bristol committees. Steventon was chosen as a suitable new location because it was close to the half-way point of the line (56 miles 22 chains from the old station at Paddington, 61 miles 71 chains from the old station at Bristol). A building for this purpose was erected: reputedly designed by the Engineer of the GWR, Isambard Kingdom Brunel in the Jacobean style, but modified by the Resident Engineer for the Reading/Swindon section of the line, J.H. Gandell (and subsequently built by him as contractor, after he resigned his post as Resident Engineer)

On 7 December 1964 British Railways withdrew passenger services from Steventon and all other intermediate stations between Didcot and Swindon. The station was demolished soon after closure and there is no evidence remaining, except for a house used briefly as the company headquarters of the Great Western Railway which still stands on the “up” (north) side of the line.

In 2016 Network Rail proposed demolition of Steventon Railway Bridge to facilitate electrification of the line between Swindon and London.  This would involve cutting off the village from the south for up to ten months while the bridge was demolished and a replacement built.  The Parish Council, Vale of White Horse DC and many residents objected strongly to the planning application and in November 2019 Network Rail suspended their appeal against the decision while it tested the electrification and the existing bridge.  Although trains could not run at 125 mph they were able to run at 110 mph and in March 2020 it was agreed that it was unnecessary to demolish the bridge. 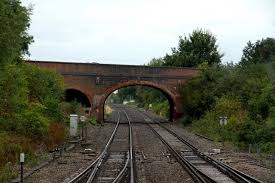